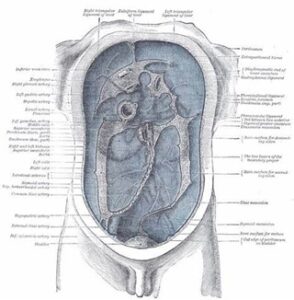 The peritoneal cavity is a potential space between the parietal and visceral peritoneum.

It normally contains only a thin film of peritoneal fluid, which consists of water, electrolytes, leukocytes and antibodies. This fluid acts as a lubricant, enabling free movement of the abdominal viscera, and the antibodies in the fluid fight infection.

While the peritoneal cavity is ordinarily filled with only a thin film of fluid, it is referred to as a potential space because excess fluid can accumulate in it, resulting in the clinical condition of ascites.

The greater sac is the larger portion of the peritoneal cavity. It is further divided into two compartments by the mesentery of the transverse colon  (known as the transverse mesocolon):

The supracolic and infracolic compartments are connected by the paracolic gutters which lie between the posterolateral abdominal wall and the lateral aspect of the ascending or descending colon.

The epiploic foramen is situated posterior to the free edge of the lesser omentum (the hepatoduodenal ligament).

Structure of the Peritoneal Cavity in the Pelvis

Due to the presence of different pelvic organs, the peritoneal cavity differs in structure between the sexes. The primary difference in structure is the location of the most distal portion of the cavity.

When humans stand or sit upright, any superfluous fluid (which could be blood, pus, or infected fluid) is likely to collect in the most inferior portion of the peritoneal cavity. Thus, it is clinically important to be aware of the differences between males and females.

In males, the rectovesical pouch is a double folding of peritoneum located between the rectum and the bladder. The peritoneal cavity is completely closed in males.

In females, there are two areas of note:

Actual passage of infectious material into the peritoneum, however, is rare due to the presence of a mucus plug in the external os (opening) of the uterus which prevents the passage of pathogens but allows sperm to enter the uterus.