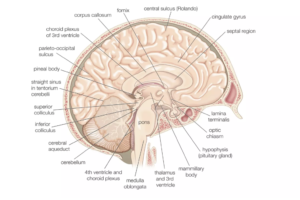 The forebrain is the largest division in the brain, which divides into two parts: the diencephalon and the telencephalon, where receiving and processing sensory information, such as language production and processing, thinking, the control of motor functions is controlled.  The cerebrum is about two-thirds of the brains total mass. The third and lateral ventricle, as well as the optic and olfactory nerves are also located in the forebrain.

The diencephalon connects the midbrain to the forebrain, and is located deep within the brain, consisting of the epithalmus, thalmus, subthalmus, and hypothalmus, is where sensory information comes through and relays parts of the endocrine system to the nervous system, through regulation of autonomic reflexes, motor function, sensory perception, and endocrine.

The Pons is found between the medulla oblongata and the midbrain anterior to the cerebellum, containing  parts of the fifth, sixth, seventh, and eighth cranial nerves regulating eye movement, sleep and wake cycles, among other functions.

The Midbrain, (Anterior,) cerebral Peduncle, (mesencephalon,) is the frontal portion of the midbrain which consists of large bundles of nerve fiber tracts connecting the forebrain to the hindbrain. The glossopharyngeal, vagus, accessory, and hypoglossal nerves are located within the myelencephalon, which regulates visual and auditory responses, as well as motor function,(movement), and connects to the spinal cord. A large bundle of nerve fibers  in the midbrain. called Cerebral Peduncle, sits in the frontal portion  of the midbrain, connecting the forebrain and hindbrain. The part of the brain that goes from the spinal column and regulates coordination, balance, equilibrium, movement and sensory information is, which is located in the metencephalon, and is where balance and equilibrium,  movement and coordination, along with other sensory information is regulated. Within the myelencephalon is the medulla oblongata, which regulates breathing, heartbeat, and digestion. The oculomotor and trochlear  cranial nerves which regulate eye/eyelid movement are also located within the midbrain. A canal connecting the cerebral aqueduct, to the third and fourth cerebral ventricle is also in the midbrain.

The hindbrain which is located in the back of the head, looks like an extension of the spinal column as it enters the skull. It is composed of the metencephalon and myelencephalon, both white and gray matter, the brainstem, and is where Most of the 12 cranial nerves are located. (The Trigeminal, abducent, facial, and vestibulocochlear nerves), and the fourth ventricular space goes through this part of the brain. It further breaks down into three important sections called the medulla, pons, and cerebellum, (looks lick a thick coral substance,) which regulates autonomic reflexes such as breathing, heartbeat, and blood pressure, balance equilibrium, coordination of movemet, and relaying of all sensory information.

The myelencephalon is the lower back part of the hindbrain vertebral development below he metencephalon, yet above the spinal cord, composed of the medulla oblongata, where the brain relays sensory and motor signals between the higher aspects of the brain and spinal cord, regulating breathing, heart rate, swallowing and sneezing, and other such reflexes. *Merian Webster Dictionary

The cerebellum is a fist sized  part of the hindbrain, regulating coordination, fine motor control, balance, equilibrium, and muscle tone, having two hemispheres, located at the back of the head, below the occipital and temporal lobes, but above the brainstem. The outer part of the cerebellum contains neurons while the inner portion contains areas that communicate within the cerebral cortex.

Within the metencephalon is the pons and cerebellum, where balance and equilibrium, movement coordination, and the conduction of sensory information is regulated. The myelencephalon also is composed of the medulla oblongata which is responsible for controlling autonomic functions like breathing, heart rate, and digestion.

The Cerebellum, (little brain,) is the largest par of the hindbrain, located in the back of the brain below the occipital and temporal lobes of the cerebral cortex, behind the brainstem. Even though it is a relatively Small portion of the brain,  (10%), it contains over 50% of the total neurons within the brain, which regulates coordination, voluntary movements, balance, posture and coordination.